Maine Nightjar Monitoring Presentation - come learn about whip-poor-wills, nighthawks, and how you can help us study them 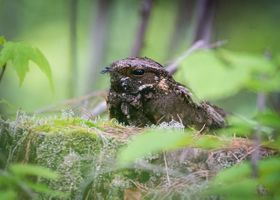 Join the Hope Library in welcoming Logan Parker of the Maine Natural History Observatory (MNHO) for a lecture on Maine nightjar monitoring. Logan is an assistant ecologist and founder of the Maine Nightjar Monitoring Project. This statewide citizen science project is collecting observations of whip-poor-wills, nighthawks, and other nocturnal birds, some of which are facing widespread declines.

Attendees will learn about the natural history of Maine’s nightjars, cryptic and nocturnal birds that are more likely to be heard than seen, and the efforts involved in monitoring these fascinating birds throughout the state, from Eliot to Calais, Kennebunk to Baxter State Park. The project is currently recruiting volunteers to adopt monitoring routes or simply make observations of nightjars in your own backyard.