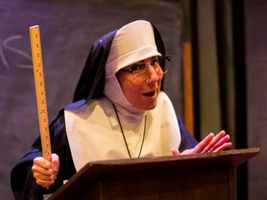 In 2019, the Gracie Theatre presented ‘Til Death Do Us Part: Late Nite Catechism 3. Based on the enthusiastic audience response to this production, the Gracie Theatre decided to bring the first play in the series to Bangor on Saturday, February 29, 2020 with two performances at 4:30 p.m. and 7:30 p.m. The show features all new lessons by Sister Mary Christina for her “adult catechism class” that will resonate with Catholics and non-Catholics alike.

“This year’s Late Nite Catechism is the original show in the Late Nite Catechism series - the one that started it all. Though it differs from the ’Til Death Do Us Part version we presented last year, we have the same “sister,” brilliantly portrayed by actress Denise Fennell. She was an audience favorite. Our patrons wanted more and demanded we have her back,” said Jeri Misler, managing director of the Gracie Theatre.

Sponsored by Downeast Toyota, this comedy is part of The Gracie’s eighth successful season. Bangor Savings Bank sponsors the season.

Late Nite Catechism is an uproarious piece of theater that takes audience members back -sometimes nostalgically, (and sometimes fearfully), to the children they once were. The irrepressible “Sister” teaches an adult catechism class to a roomful of “students” (the audience).

Over the course of the play, “Sister” goes from benevolent instructor, rewarding the “students” for correct answers with glow-in-the-dark rosaries and laminated saint cards, to authoritative drill sergeant. These abrupt mood swings are bound to strike a resonant chord with everyone who survived the ups and downs of going to school with an omniscient authoritarian at the helm.

The Catholic Register (Toronto) said, “The show appeals to Catholics and non-Catholics alike since ‘Sister’ clearly explains religious references in lighthearted ways while maintaining a serious tone that isn’t too preachy and far from being saccharine.”

The New York Times in 1996 declared, “Late Nite Catechism speaks to an audience much broader than the membership of any one church.”

Denise Fennell plays the role of Sister Mary Christina. She was first discovered by the show’s creator, Maripat Donovan while appearing as “Tina” in the Off-Broadway production of Tony n’ Tina's Wedding. Donovan trained Fennell personally for the role. Denise is now a veteran of the Late Nite Catechism series and has played to rave reviews across the United States and Canada. She recently completed a run of Shear Madness at The Stages Repertory Theatre in Houston, Texas. She has also appeared in the Off-Broadway company of Shear Madness in New York City. Denise is best known for her portrayal of “Sister” in the Late Nite Catechism series and in Jane Wagner's award-winning comedy The Search for Signs of Intelligent Life in the Universe.

Late Nite Catechism, written by Vicki Quade and Maripat Donovan, made its debut May 28, 1993 at the Live Bait Theatre in Chicago, Illinois. Since then, it has been presented in over 410 cities and six countries to over 3.5 million people. The show has raised over $4 million for retired Sisters and Catholic Organizations.

Late Nite Catechism will have two shows at the Gracie Theatre on Saturday, February 29 at 4:30 p.m. and 7:30 p.m. Ticket prices range from $25.50 to $37.00 and group discounts are available for groups of eight or more by calling the box office. To purchase tickets or for more information about group rates, call the Gracie Box Office at (207) 941-7888 or visit www.gracietheatre.com