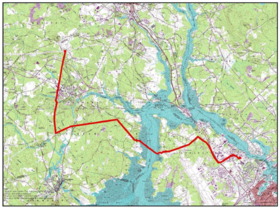 Eversource is doubling down on what it says will be the best way to run a new power line under the Seacoast's Little Bay.

The transmission line known as the Seacoast Reliability Project is how Eversource wants to meet the mandates of New England’s electric grid operator.

First proposed in 2016, the project includes a mile of cable buried beneath Little Bay, between Durham and Newington.

Potential methods include a process called jet plowing, where sediment is blown back as the line is laid, and horizontal directional drilling, where the cable is bored beneath the bay bottom.

Some stakeholders say drilling would stir up less sediment and impact the bay less.

Eversource's new study, released this week, counters that. It says jet plowing is less risky and more efficient, including fewer impacts to neighbors, and a far shorter and cheaper construction schedule.

The study also says both methods would temporarily stir up some sediment, with low environmental impacts overall. But it says drilling would require more on-land staging and disruption to neighbors, and could risk more serious accidents that would harm the bay.

Other stakeholders may submit or request studies of their own as part of hearings on the project, which are set to begin in late August.

Read all the documents submitted as part of the Seacoast Reliability Project's state siting application.