Times are bright for solar energy in New England. From small projects to massive, multi-acre arrays, solar projects are both changing the landscape and transforming the way we buy, sell and transmit electricity.

Yet the solar boom poses unique challenges for the regional grid, as well as for one small, member-owned utility in northern Vermont.

Inside the control room of the Vermont Electric Cooperative, operator Dan McMullen is keeping a close eye on screens that show the electrons flowing in and out of the co-op’s northern Vermont territory.

“We got a couple outages going on. One is from a tree coming down and breaking a pole. And then we’ve got another one, an underground fault that crews are working on and hopefully to have restored latter part of this forenoon,” McMullen says. “So it’s fairly quiet this morning compared to what it can be at times.”

It’s cloudy and rainy this morning, so the instruments aren’t showing much output from solar installations.

This story is part of The Big Switch, a special energy series from the New England News Collaborative. Explore the series here.

Jeff Wright is the co-op’s chief operating officer. He says there’s one major benefit from solar power – at least in the summer.

“It really does help relieve pressure on the system during the day, when it’s peaking,” he says.

But during a recent sweltering week in August, Wright and the members of his co-op saw the limitations – and the potential downside – of solar generation. 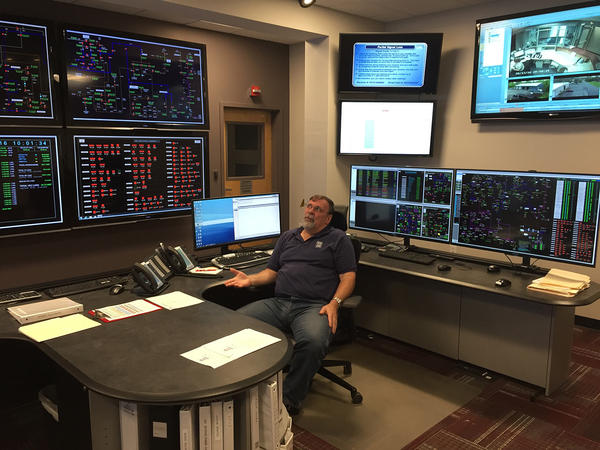 To understand what happened, you have to understand how power companies pay for their transmission costs. These prices are set annually – and are pegged to how much the utility uses on that one time of the year when it draws the most electricity from the grid.

Little swings in demand can make a big difference in transmission costs.

And that bill ultimately gets passed on to customers.

So every power company pays obsessive attention to that day of peak use; they even ask customers to turn off appliances like dryers or dishwashers until the peak has passed. Solar systems can help offset that peak demand in the summer. But they did not help Vermont Electric during that hot week in August.

The problem was it was sunny in Massachusetts, where solar arrays all over the state helped reduce the strain on the grid. But in northern Vermont, clouds and rain reduced the solar output. So Massachusetts will save on transmission costs for the year, while Vermont will not.

“It’s a really interesting push-pull,” Wright says. “Because when it’s hot and it’s sunny it’s nice to have less load to manage. But when you start to have those regional issues, and one’s doing a lot of [solar] generation, and one’s not, and you start to set your transmission costs based on your load allocation, it gets really volatile. And I think in the future that might become worse. But it’s definitely something that no one has really talked about yet.”

Those discussions are starting to happen, triggered by a huge boom in solar in Vermont, and across New England. On a bright summer day across the Green Mountains, solar meets 10 percent of Vermont’s electricity demand. Across the six-state region, solar will deliver up to 1,600 megawatts, according to ISO-New England, the regional grid operator. That’s compared to 250 megawatts four years ago. By 2026, ISO expects solar to supply 3,300 megawatts in New England.

But here’s a challenge: Remember those screens the guys at Vermont Electric were looking at, with power flowing across the grid? Grid operators can’t see most of that solar generation. Marica Blomberg, a spokeswoman for ISO, says much of the solar generation is what’s called “behind the meter.” It’s from rooftop panels or small arrays near houses.

Another challenge is the intermittent nature of solar power – clouds that obscure the sun can drastically drop production from one second to the next.

“If you can’t see it, and you can’t predict it, what you’re forced to do is to run the grid more conservatively,” Dunn says. “And what that means, in terms of air pollution and money, is that you have power plants on standby.” 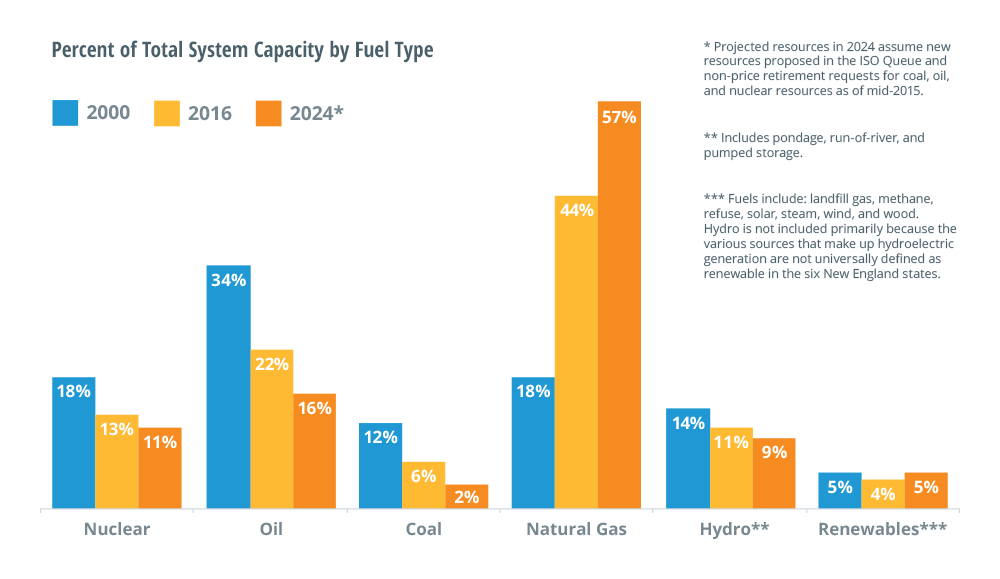 Dunn says what’s needed is more accurate weather forecasting. VELCO has teamed up with IBM to use a supercomputer to produce precise weather forecasts down to one square kilometer. Dunn says knowing when the sun will shine and the wind will blow means the grid needs less of that natural gas power on standby.

“When we have data – and we’re able to confirm the actual predictions of what we’re seeing – I think then we’re in place where we can comfortably make the decisions to not make the infrastructure investment if it’s not needed,” he says.

ISO New England has teamed up with VELCO on a pilot project to improve forecasting for solar and wind generation.

Dunn says more precise weather forecasting could save tens of millions of dollars annually because those standby generators wouldn’t have to run so much in New England.

In many ways, the New England solar boom fulfills a longstanding goal of environmental policy – to switch to greener, more climate friendly sources of generation.

“Vermont is on the bleeding edge of the bleeding edge in the Northeast. That is, we are going all-in on solar and other resources,” Dunn says. “And in some ways, that's a good thing in terms of forcing us how to operate the grid in these circumstances.”

Dunn’s colleague at VELCO, Kerrick Johnson, the vice president for external affairs, puts it this way: “The rate of [solar] adoption has presented some temporary challenges in how you absorb this,” he says. “They can be – if not addressed – they can be serious. But this is exactly what policymakers, what utility leaders, this is what we’ve been looking for.”

And at the Vermont Electric Cooperative control room in Johnson, Chief Operating Officer Jeff Wright says his technical staff relish the challenges presented by more solar in the grid.

“We love renewables. We love them in the right spot, obviously. If we could control where everyone one of them went, it would be a great thing,” he says. “But integrating this and managing it, actually my engineering team is having a ball with this stuff.”

This report comes from the New England News Collaborative. Eight public media companies coming together to tell the story of a changing region, with support from the Corporation for Public Broadcasting.