Belfast: Our Town and Times through the Editorial Cartoons of Douglas Coffin 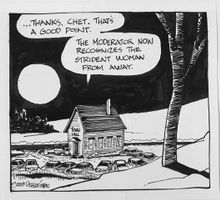 For 22 years, the editorial cartoons of Douglas Coffin were a popular feature of the now-defunct Waldo In

From February 2 to March 31, 2021, the Belfast Free Library will host an exhibit of the editorial cartoons of Douglas Coffin. Coffin’s single-panel, black-and-white cartoons were a popular feature of the upstart Waldo Independent -- a Belfast-based weekly newspaper that from 1985 to 2008 provided lively competition to the deep-rooted Republican Journal, offering an alternative perspective on local news and issues. For this show, Coffin, who now lives in Stockton Springs and maintains a lettercutting studio in Belfast, has selected about 230 of the more than 1100 cartoons he produced over the life of the Waldo Independent. The exhibit also features written remarks by local journalists Jay Davis, who founded the Waldo Independent, and Toni Mailloux, who was its editor for 18 of its 23 years. The paper flourished during Befast’s evolution from a battered industrial town with a skyline of grain silos and processing plants, an undeveloped waterfront, and essentially no tourism to the attractive, diverse, and fractious community it is today. Coffin’s cartoons chronicle the decline of Belfast’s poultry-processing economy, the arrival and impact of credit card giant MBNA, the fate of the city-owned railroad, the voters' rejection of big-box stores, the rebuilding of the popular footbridge over the Passagassawakeag River and sometimes-heated debates over school budgets, commercial development, city government and much more. For those who have recently moved to Belfast or the surrounding area, the show provides a gritty, whimsical look at the history of the community they now call home. And for longtime residents, these cartoons offer a look back to a time when Belfast was transitioning from its 19th century roots to its 21st century future. Due to Covid-19 restrictions, there will be no public opening reception for the show, which will hang in the library’s Barbara Kramer Gallery through the end of March. Visitors may view the exhibit during regular library hours, in accordance with public health restrictions. For more information, call the library at 207-338-3884, ext. 10.