A report released this month from the Southern Maine Planning and Development Commission finds that rental housing in York County is no longer affordable for working-class families.

In fact, the report suggests that rental affordability in York County changed more rapidly than in the rest of the state. Using data from the Maine Housing Authority, it shows that in 2020, the median cost for a two-bedroom rental was $1,704, compared to a statewide median price of about $1,000.

Anne Jagodowski says she moved to Maine in 2019 for her son’s job, and his employer set them up in an apartment in downtown Biddeford.

Then came the pandemic. The owner of their building decided he wanted to sell, and her son lost his job.

“Shortly after COVID struck his boss called him and said, ‘You have two days to vacate the house, I want to put it on the market,'” Jagodowski says the landlord told them. “My son explained that two days wasn’t nearly enough time during a pandemic to try and find a place.”

They were offered another apartment on a second floor, but Jagodowski says with her arthritis, she's unable to go up and down stairs.

Because a federal eviction moratorium temporarily halted evictions during the pandemic, Jagodowski says she and her son were able to stay in their apartment temporarily.

“This past week, there was an eviction hearing…Luckily, we had a fantastic lawyer who got us an extra week [in the house], but as of July 23, we have absolutely nowhere to go,” Jagodowski said.

Jagodowksi says she has searched for a new home all over southern Maine. Her son recently got a job in Portsmouth, but they haven’t been able to find anything in New Hampshire, either.

Jagodowski says she could never give up her pets who are part of the family.

Another frustration is that Jagodowski and her son don’t meet the requirements for Section 8 housing, the federal program that provides rental assistance to qualifying low-income tenants.

This Friday is the deadline to vacate the apartment. And Jagodowski says after a year of searching, her only option is to pack up her belongings and hit the road.

Other renters in the area are also feeling the pressure of an unaffordable and competitive market.

“I’m [looking] everywhere. Primarily, I do a lot of Zillow, Renters.com...we do a lot of Facebook Marketplace, which is really busy at this point,” said Ben Othmer. “You kind of have to be on everything, truthfully, because if you’re not, you’re limiting yourself and your opportunities because of what the demand is right now.”

Othmer has rented in Biddeford for three years, and during his current search for an apartment, he hasn’t had much luck as he used to in southern Maine.

“It’s so much more difficult now. Previously, I had rented in Old Orchard Beach as well, so that one was kind of a quick hunt online and I got lucky and got in there,” said Othmer. “It’s still very much driven by the internet. At this point, the competition is so much more.”

With the development of the downtown mill district and its location between Portland and Boston, Biddeford has become a hot real estate market and popular tourist destination. Biddeford Mayor Alan Casavant says this has created some growing pains.

“There’s a lot of great things happening, but with more people wanting to come here, putting more and more pressure on things like housing, it’s pricing people out of the market,” said Casavant. “What we’re seeing, for example, are increased cases of homelessness. It’s not the traditional homelessness that people stereotype. It’s people who are working who can’t find livable, affordable space.”

The affordable housing problem isn’t unique to York County. It’s a struggle for renters across southern Maine. And Guy Gagnon, director of Biddeford Housing Authority, says while more affordable housing is needed, so is awareness about who is struggling to find it.

Casavant said cities are trying to do what they can to help, but he views it as a state issue.

The state of Maine received $1 billion in federal relief funds from the American Rescue Plan, and state lawmakers recently agreed on a plan to spend the money. The initiative includes allocating a portion of the funds for affordable housing development. But that will take time.

And for Jagodowski, time will run out on Friday.

“I can’t imagine being 60 years old and living in my car with two dogs, a cat and my son,” said Jagodowski. “But there’s just nowhere to go.” 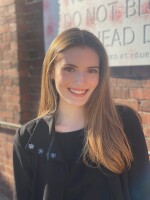