The pianist, Eleonor Bindman talks about her new recording of her own piano transcriptions of the cello suites by J.S. Bach, one of our recent CD's of the week. 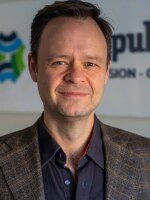 Aaron Engebreth
Aaron Engebreth enjoys a varied solo career in opera, oratorio, recital and devotes considerable energy to the performance of established music and contemporary premieres, frequently collaborating with many of today's preeminent composers. In the U.S., he has been featured as a guest soloist on stages from Carnegie Hall, the Kennedy Center and Boston's Symphony Hall, to international appearances from Sapporo Japan's Kitara Hall to Le Theatre de la Ville in Paris and the AmBul festival of Sofia, Bulgaria. He has been a guest of the Tanglewood, Ravinia, Rockport and Monadnock Music Festivals as well as many of the country's fine symphony orchestras, among them Portland, Virginia, San Diego, Charlotte and the Buffalo Philharmonic Orchestra.
See stories by Aaron Engebreth