When skilled professionals arrive in Maine as immigrants, refugees, or asylum seekers, many face barriers to re-entering their field of expertise.

It’s a story of countless personal challenges, but has consequences for the whole state — even as Maine struggles to retain skilled workers, many foreign-trained professionals are stuck in entry-level jobs. Now, a new law aims to bridge that gap.

As long as she can remember, Francine Ngabu envisioned a career in law.

"Since I was a little girl, I was like one of those persons who would step up for the weakest people,” she said. “I was just like trying to defend others.”

This was in Kinshasa, the capital city of the Democratic Republic of the Congo. And sure enough, Ngabu went on to earn a law degree, and later became a judge. It was a career she loved, and while it wasn’t the most lucrative job, it assured her a certain amount of respect in society.

But it all came to an abrupt halt when she fled the DRC in 2011 after her work angered the political establishment. She landed in Portland and began her asylum process.

In addition to the shock and trauma of escaping her home country, she had to confront the sudden loss of a central part of her identity.

Ngabu has company among countless highly qualified professionals who have arrived in Maine as immigrants, refugees, or asylum seekers only to find themselves stuck in jobs far below their skill level.

Stefanie Trice Gill is the founder of IntWork, a recruiting company that works closely with professionals arriving from other countries.

"There tends to be an immediate de-classing when people come to Maine,” she said. “So it goes from ‘I’m a doctor or a surgeon in the Congo’ to ‘Oh well, you’re not a doctor here, here’s the shelter, you need to understand how things work.’”

She said barriers to entry for foreign-trained professionals push many people to leave Maine. And that, in her view, is a lose-lose situation.

That irony is not lost on Célia Mantovani, a psychiatrist from Brazil who has struggled for years to get her medical credentials recognized.

“Every time I hear ‘Oh we need psychiatrists so much in Maine’ and I am here, and I keep thinking, ‘Oh my god!’” she said.

Mantovani has a PhD, more than two decades of clinical experience, and her research has been widely cited.

To get a psychiatric license in the US, she would need to complete a medical residency. But she’s been told she has too much experience to qualify for a residency.

“It’s always like what people say is a Catch-22. So that’s our situation,” Mantovani said. “It’s so frustrating.”

Mantovani did have a breakthrough recently, when she got certified as a counselling professional with the help of Portland Adult Education’s New Mainers Resource Center. It’s not the full medical license she had in Brazil, but it was enough to land her counselling jobs at a school and a pediatric clinic.

Mantovani is not alone in pivoting to a related career that allows her to apply most, if not all, of her professional background.

Moe Issa made a similar decision when he enrolled last year in a bank teller training program, also with Portland Adult Education. Issa had moved to the US from Baghdad several years earlier after making a career at the Iraq Stock Exchange, and his first job in the US was at an ice cream parlor in Virginia.

“From stocks to the ice cream shop, it’s a big change,” said Issa, who now lives in Westbrook. “But to start a new life, you should accept everything.”

He said replicating his exact career did not seem feasible, but training to be a bank teller allowed him to get a toehold in the financial industry. It led to a job at Infinity Federal Credit Union, where he was quickly promoted to the position of financial analyst, a job he said allows him to feel like himself again.

“I can’t describe that, it is an amazing feeling,” he said.

Many others are still locked out of their fields though —and a new state law aims to provide some relief.

“It’s exciting to me cause it feels like a win-win for everybody,” said State Rep. Kristen Cloutier (D-Lewiston) who sponsored the legislation.

The law gives state regulators greater flexibility in recognizing professional credentials from other jurisdictions, whether that’s another state or another country. It also sets up a process for provisional licensing.

"So if folks need a little bit more education in a certain area, they can be working while also receiving that education at the same time,” Cloutier said.

The governor signed the law earlier this month, and state officials still need to work out exactly how it will be implemented.

In the meantime, Francine Ngabu, the judge from Kinshasa, is re-starting her law career through a job at the Immigrant Legal Advocacy Project.

She’s also completing an intensive legal training that will allow her to represent clients in immigration cases. She says it’s hard to express how good it feels to be working again in her area of expertise.

"I really love it,” Ngabu said. “It’s like me, re-becoming myself.”

She says her next project will be to get her law degree. Again.

Ari Snider is a Report for America corps member. 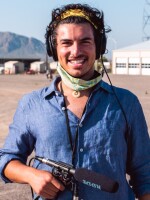 Ari Snider
Ari Snider reports on refugee, immigrant, and asylum-seeking communities in Maine. He is a Report for America corps member. He grew up in Midcoast Maine and has reported for public radio stations in Southeast Alaska and Far West Texas, covering everything from salmon fishing to the restoration of a historic adobe church on the US-Mexico border. He got his start in audio storytelling as an undergrad at Brown University and through internships at radio stations in Vermont and Rhode Island. His work has won three Alaska Press Club awards and one Regional Murrow Award, and has aired on radio stations throughout Alaska, Texas, and New England. When looking to get out of town for a weekend, Ari has a special fondness for the islands of Penobscot Bay and the lakes and mountains of the North Woods.
See stories by Ari Snider