Maine Beer Company expanded its brewing and retail operations to Freeport, a bit more than one year ago from a small industrial space in Portland. The craft brewer is fitting right in as a tourism destination with its more notable neighbors L.L. Bean, Nike, Patagonia, Brooks Bros. and Calvin Klein with today's release of "Dinner," a Double IPA bursting with hops.

The line of people extended all the way to the back of the property and the line of cars extended out onto U.S. Route 1. Many of the cars, as noted by photographer John Bradford, were from out-of-state, much like one would observe in the much larger L.L. Bean parking lot on a mid-summers' day.

"Dinner" can only be had on-site at the brewery today and each person is limited to two cases only. And at $8 per bottle, this beer is on the upper end of the price scale making its popularity all the more impressive. The extra hoppiness of this beer has lead Maine Beer Co. to advise that "Dinner" be consumed as fresh as possible.

This built-in scarcity and plea to drink while fresh are contributing factors to the crush of visitors to the Maine Beer Company's facility. Also contributing is the larger-than-normal pool of available consumers as Sierra Nevada's "Beer Camp Across America" is slated to kick-off Friday evening, August 1 at Thompson's Point, 15 miles down Route 1 in Portland. The event is expected to be the largest-ever gathering of beer lovers and beer makers in Maine. Five-thousand tickets have been sold to the Portland event alone according to reports. Camp goers will be able to sample beers from the 120 breweries in attendance from across New England, New York, California and Colorado, and according to the Maine Brewers' Guild, 38 of the 120 breweries will be from Maine.

Portland is the fifth stop on this seven-city tour. Some of the proceeds collected at the Portland "Beer Camp" stop will be given to the Maine Brewers' Guild which is the non-profit marketing and lobbying group created by the brewers themselves.

For more information about Beer Camp Across America visit: www.beercamp.sierranevada.com. 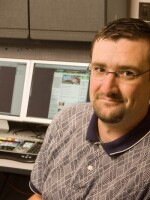 Chris Sweet
Chris is currently the Manager of Digital Media for MPBN, a position he's held since 2008. Proior to that, he was co-creator and executive producer of the historical documentary series Maine Experience, during which, Chris won a New England Emmy award for Outstanding Historical/Cultural Program. Previously, Chris won an Emmy award for his work as executive producer on the historical documentary series Home: The Story of Maine.
See stories by Chris Sweet