At a rehearsal just days before the opening of the play, "The Ahab Inside Me," the band is working one of the big numbers, Moby Dick Blues, a reference to the play's central metaphor.

"Ahab is an addict. The white whale is an allusion to opium, or heroin, its contemporary scourge," said Maine playwright Michael Gorman. He said the metaphor is used to help tell the story of a young commercial fisherman who is addicted to opioids.

"And Ahab, because of his obsessiveness, after losing his leg goes back after the whale again and again in a similar way that an addicted person tries to recapture that first high but never can, and over the course of that how that addiction imperils the lives of everybody around them," he said.

Gorman lost his brother, a commercial fisherman, to a heroin overdose in 1998. To help process that loss, Gorman set out to write a trilogy of plays that explore the ruinous effects that opiate addiction has had on the fishing community. From that work other projects evolved including a blues opera, "The Ahab Inside Me," that runs this weekend at the Colonial Theater in Augusta.

Using a blend of original live music and song, spoken word, dramatic performance, and other devices Gorman explores the traumatic effects of an opioid overdose on a fishing family and community efforts to address the root causes of addiction. It's part of an ongoing project called Chasing the New White Whale, which Gorman describes as a "performance art & advocacy model" dedicated to bringing awareness to the problem. While opioids are affecting all corners of society Gorman said fishermen are vulnerable because they are often risk takers who can be injured at work, but can't take time off to recover, so instead seek out painkilling substances

"And then the stigma around admitting you have a problem...especially for strong independent-minded people, which leads them deeper into isolation and addiction until sometimes they are unreachable," Gorman said.

Gorman said he hopes the audience will be moved and entertained, but will also come away with a greater awareness of addiction, and more specifically, an understanding of the importance of making the overdose antidote Narcan more available.

"The thing that survivors...community members or family members suffer from the most ourselves is that guilt or sadness that we could have done more," Gorman said. "My brother was a classic case...he passed away coming out of prison. He made the fatal decision to use heroin again and his tolerance was so low from being in prison and not having access to drugs that he passed away. If somebody had had Narcan there, he probably would still be alive today."

"The Ahab Inside Me," a production of Michael Gorman's Rockland-based "Forty Hour Club," runs this Friday Saturday and Sunday at the Colonial Theater in Augusta. After Friday's performance, the state 's director of Opioid Response Gordon Smith will moderate a discussion. 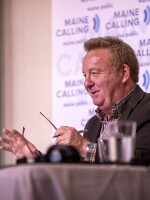